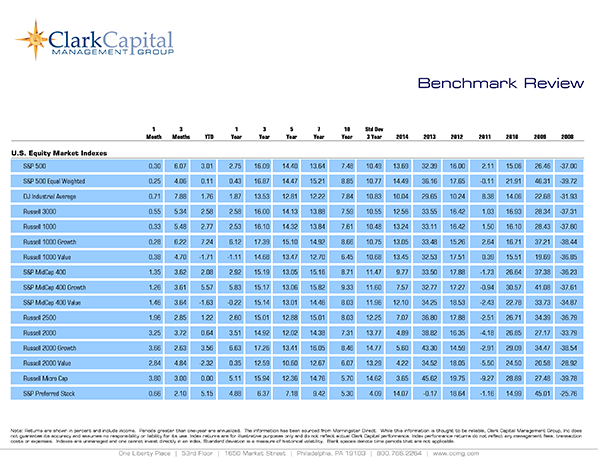 The winning streak for global equities continued in the new year and the S&P 500 logged its 15th consecutive month of gains in January. Despite some late-month weakness, the S&P 500, Dow Jones Industrial Average, NASDAQ, Russell 1000, Russell 2000, and Russell 3000 each hit all-time highs once again during the month in what was a very strong start to the year for U.S. stocks. The S&P 500 increased 5.72% for the month. Small cap stocks, as measured by the Russell 2000, rose by 2.61% in January, but they still lagged their large-cap counterparts as they did during 2017. After growth stocks dominated value stocks last year, January saw this trend continue as growth stocks gained 6.84% compared to more modest returns of 3.67% for value stocks. Developed international stocks continued to show gains as well in January, but unlike 2017, their returns were slightly more muted compared to the S&P. Developed international stocks, as measured by the MSCI ACWI ex USA Index, increased 5.58% in January. Continuing the trend from 2017, emerging market equities showed some of the strongest returns to begin the new year and increased by 8.32% for the month.

Bonds were under pressure during the month of January as the yield on the 10-year U.S. Treasury rose sharply and broke above 2.70% for the first time since 2014. After closing 2017 around 2.40%, the yield on the 10-year U.S. Treasury closed January at 2.72%. As expected, the Federal Open Market Committee (FOMC) kept the fed funds target rate unchanged at its January meeting, which marked the final meeting under the leadership of Janet Yellen. Jerome Powell is scheduled to take over the chairmanship of the Federal Reserve in early February. The Bloomberg Barclays Aggregate Bond Index declined by 1.15% for the month as Treasuries and investment grade corporates fell by 1.36% and 0.96%, respectively. Municipals declined by 1.18% during the month, while high yield bonds bucked the trend and increased by 0.60%.

January marked the 15th consecutive month of gains for the S&P 500. The major U.S. stock indices, including the S&P 500, Dow Jones Industrial Average, NASDAQ, Russell 1000, Russell 2000, and Russell 3000 again hit record highs during the month. Despite some late-month weakness, returns for the full month of January were positive across the board. Growth stocks, which dominated value stocks in 2017, continued that trend of outperformance for the month. International stocks, both developed and emerging, surpassed domestic equity returns in 2017. However, U.S. equities modestly outpaced developed market stocks in January, while emerging markets continued to stand out compared to U.S. and developed international equity market results.

The yield on the 10-year Treasury rose sharply in January and broke above 2.7% for the first time since 2014. The yield on this benchmark indicator closed the month at 2.72% compared to the prior month’s close at 2.40%. Overall, this increase in interest rates put pressure on most fixed income sectors for the month. The Bloomberg Barclays Aggregate Bond Index, U.S. Treasuries and investment grade corporates all turned in negative results in January. High yield bonds managed to gain +0.60% for the month as credit exposure was once again rewarded. The yield curve flattened dramatically over the course of 2017 though this trend reversed course in the first month of 2018 as the 3-month/10-year spread widened by 25 basis points to 126 basis points.

The economy continued to grow in December. After the labor market experienced two consecutive months of job growth in excess of 200,000, job gains in December were more muted coming in just under 150,000, but the unemployment rate remained at 4.1%. Both the ISM Manufacturing Index and ISM Non-Manufacturing Index continue to show economic grow. After back-to-back quarters of gross domestic product (GDP) growth above 3%, the preliminary reading of fourth quarter 2017 GDP growth was somewhat disappointing at 2.6%. The housing market slowed somewhat, as existing and new home sales declined. Housing starts also contracted but building permits, an important indicator of future construction, remained flat at healthy levels. As expected, the Federal Open Market Committee (FOMC) maintained the fed funds target rate at a range of 1.25% to 1.50% at its first meeting of 2018. The FOMC meeting in January marked the last for Janet Yellen as Jerome Powell will take over the chairmanship of the Federal Reserve in February. The next scheduled meeting concludes on March 21st and there is a fairly high likelihood of a rate increase at that meeting.